Hope in all climates 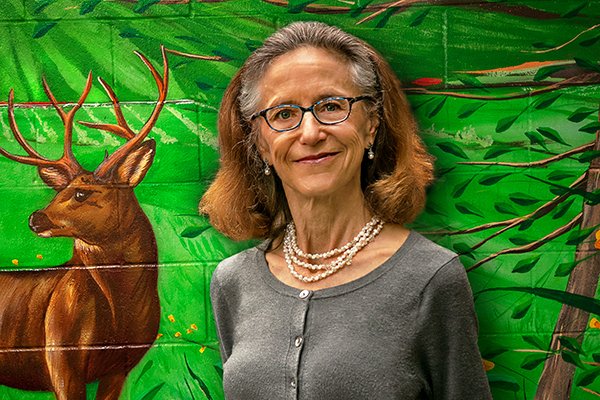 Cynthia Moe-Lobeda, a professor of theological and social ethics at Pacific Lutheran Theological Seminary, worked to gain approval for a new Master of Divinity concentration in climate justice and faith. The seminary has been part of the university since 2014.

The day you opened your eyes to systemic injustices, you were on a Lutheran youth retreat? Yes, it happened when I was 14 and we saw a film about the exploitation of people in the Caribbean by major corporations that provided our cheap breakfast food. That shaped my life.

And now you focus on climate justice. My work has also revolved around racial justice and economic justice because race and economic injustice and climate are all mixed together. I have just finished a couple of chapters on “climate colonialism.” Colleagues in India taught me that term. It points to the fact that climate change is devastating people around the globe who are least responsible for greenhouse gas emissions, and they are disproportionately economically impoverished people, people of color, and living on the continents colonized in the colonial era.

What do theology and religion have to do with this? I believe the world’s great faith traditions have a great deal to offer in understanding and motivating action toward climate justice, racial justice and economic justice.

It’s interesting today how many secular voices are calling for religion to be involved in the climate crisis: voices from the U.N., voices from many nongovernmental organizations, voices from the literary world. Toward the end of a recent book about climate change, The Great Derangement, Amitav Ghosh, who is an Indian literary figure, says one of his greatest hopes is in religion.

Religion isn’t on Earth just to serve religious people. It’s on Earth to serve ways of living where the whole web of life can flourish and all people can have lives with justice and joy.

In your 2013 book Resisting Structural Evil, you introduce the idea of a sin of “uncreating.” For someone reading the Bible, what does it mean to “uncreate”? Christian and Jewish faith claims that God created a world that is “good.” The Hebrew tov, while translated as “good,” also implies “life-furthering.”  So, the primal act of God – creation – is not merely to create a magnificent world, but a magnificently life-furthering world. This is a terrifying thought, that by fueling climate change, we are undoing that very “tov,” Earth’s life-generating capacity. This is the sin of uncreating.

Various religions deal with sin differently. The faith tradition I’m situated in, the Lutheran tradition, also says that God’s grace is infinite and that we are not ultimately condemned. But that that does not free us to go on with sin! It frees us to renounce and repent and turn a different direction.

So, one theological or biblical reading would be: We can’t really repent of the sin of uncreating without recognizing it. Therefore, it is tremendously important that we recognize what we are doing in climate change. Repentance doesn’t mean just saying, “I’m sorry.” Repentance means turning the other direction. The Holy Spirit empowers us for tremendous repentance. That would mean becoming generators of sustainable ways of life, regenerative ways of life, rather than climate-destructive ways of life.

The economic system – we can change it. Humans will decide which way it goes. It can go toward increasing wealth concentration and ecological degradation, or we can change the economy to promote equity among human beings and the flourishing of Earth’s ecosystems.

Do you have practical guidance on this? I’m working on an edited series of books designed to help economically privileged North Americans who want to be building more equitable, ecological and democratic economies. I see that many, many people are realizing that finance-driven capitalism is not serving human well-being or the Earth’s well-being – but don’t know how to be involved in creating something different.

How are you involved, day to day? I, like everybody, am not living into the new economy as fully as I hunger to be doing. And I want to be clear that I do not see myself as an exemplar in any way. I am just making my efforts.

I guess my philosophy is that you have to work on the lifestyle level and the systemic level. I firmly believe that people’s lifestyle practices are crucial, but not adequate to achieve a more just and ecological economy. People need to be involved in efforts for systemic change.  I believe that is integral to the life of faith, and leaders in many of Earth’s religious traditions are saying so, including Jewish, Christian, Muslim and Buddhist traditions.

Could you please list some things? On the lifestyle level, I have been practicing what I would call anti-consumerism, a low-consumption lifestyle, since I was about 14. That involves things like not buying new clothing or new accessories. I use hand-me-downs or the secondhand store. And we try to eat low on the food chain. We eat a lot of local fruits and vegetables, no red meat, and little poultry and fish. We try to use as little fossil-fuel based energy as possible, so we have one electric car and one hybrid, and definitely don’t turn on air conditioning in our home.

On a more systemic level, we try to have all of our savings in socially just and ecologically sustainable funds. And I remain on alerts for legislative action nationally and locally, and participate when I can in protest movements. I want to be more involved with 350.org and other climate justice groups but really struggle with finding the time.