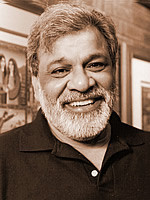 Rev. Prof. Charles Amjad-Ali, PH. D., Th. D., was the inaugural Martin Luther King, Jr., Professor of Justice and Christian Community, and the Director of Islamic Studies (Emeritus) at Luther Seminary, St. Paul Minnesota. He was also the first Archbishop Desmond Tutu Professor of Ecumenical Theology and Social Transformation in Africa at the University of Western Cape in South Africa in 2013.

Modern-day expressions of Islamophobia have deep roots in Christian history and have been remarkably consistent, in spite of various social, ideological, and structural permutations, even when our vocabulary of prejudice has undergone euphemistic modifications. Luther's sophistry against Islam is, in many respects, no different than some of our contemporary expressions, especially since September 11, 2001. Luther's vicious tirade against Judaism was continuously used by the Church for its ever present reprehensible anti-Semitic practices and rhetoric, reaching its most evil, efficient, and devastating expression in the Shoah some 400 years later.

In dealing with Luther, the Reformation, and Islam, we must seriously address the issues of centuries-old misunderstandings, malice, and contrived vilification of the Muslims, and their Prophet, scriptures, religion, and culture: we must overcome ignorance about Islam as a whole. For the last three centuries, the Western sense of superiority in every sphere of human endeavor has scarcely been challenged, both in its imperial colonial and postcolonial expressions. It has become part of our overall heritage, most painful to adjust to and seemingly impossible to abandon. Luther’s writings should provide critical clues for a new self-understanding of our situation so that we have a more virtuous approach to the contemporary other.

Gathering with Refreshments
Wednesdays at 10:30 am
Ubuntu
(provided by the Student Association)

Worship in Word and Sacrament
Wednesdays at 11:00 am
Ubuntu