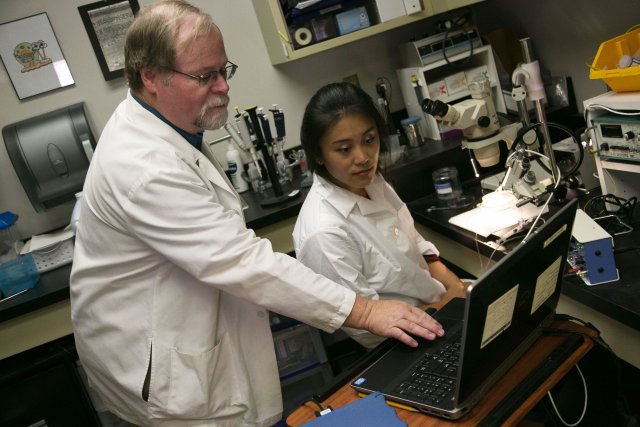 Associate professor of biology Kenneth Long was the first of the emeriti faculty to arrive at Cal Lutheran 32 years ago, and he has been at the forefront of physiology and neuroscience curriculum.

Brint served as dean of the College of Arts and Sciences from 2000 to 2005 and as the Uyeno-Tseng Professor of International Studies since 2005. The Santa Monica resident and two-time Diversity Professor of the Year started Cal Lutheran’s study abroad program at Oxford University and the first Diversity Council.

Gerson’s love of mentoring brought her to Cal Lutheran in 2001. She has worked to excite and guide student researchers and previously served as director of the Office of Undergraduate Research and Creative Scholarship. The Westlake Village resident received the President’s Award for Teaching Excellence in 2012.

Griffin served as dean of Cal Lutheran’s College of Arts and Sciences from 2007 to 2017 before joining the faculty. Her areas of scholarship have focused on the intersections of pagan and Christian cultures in Irish religious and literary texts, but the Moorpark resident has taught a wide variety of courses throughout her career.

Jacobson began teaching at Cal Lutheran’s Pacific Lutheran Theological Seminary in 1996. The Emeryville resident’s research interests include the relationship of neuroscience and faith formation. She has served as director of the Diaconal Ministry Program, chair of the Academic Committee and theses coordinator at PLTS.

Kissinger started his career at Cal Lutheran in 1991. His specialty is animal learning and memory, but he has taught nearly every nonclinical psychology course. Students appreciate his fun and inspiring approach to teaching. The Thousand Oaks resident also served as the faculty mentor to athletic teams and adviser to mascots.

Long was the first of the emeriti faculty to arrive at Cal Lutheran 32 years ago, and he has been at the forefront of physiology and neuroscience curriculum. Known for his sense of humor, he helped countless student researchers pursue their passions.  The Thousand Oaks resident has received National Science Foundation grants.

A first-generation college student, Uellendahl has advocated for students from historically underrepresented backgrounds and her recent research has focused on first-generation graduate students. The Los Angeles resident chaired her department for 19 years and received the President’s Award for Teaching Excellence in 2013.