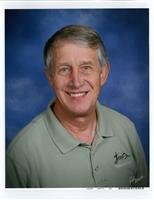 Mark was well known for his intense determination, his impeccable standards of integrity and honor, but also his kind and generous heart, and his infectious and playfully obnoxious sense of humor.
The son of an Air Force chaplain, Mark's childhood spanned locations such as Georgia, St. Louis, Okinawa, Florida, Hawaii, California and Montana. His mother passed unexpectedly when he was 4 years old, and his father would soon remarry, adding two sisters and his new mother, Ruth, to the family. Eventually, there would be seven children in their "his, hers and theirs" family.

Mark attended the Air Force Academy. It was there in Colorado Springs where he met his wife, Kim, on a blind date. Mark graduated in 1972 and entered pilot training in Del Rio, Texas. Mark and Kim married on June 9, 1973, and moved to Tucson, Ariz., where Mark flew the A-7 Corsair, a fighter plane.

During this time, Mark's passion for running bloomed as he trained tirelessly for marathons. He would go on to run in the Boston Marathon twice. His personal record for a marathon was 2:34, taking first place in a run in Oregon.

After leaving active duty, Mark joined the Colorado Air National Guard and started flying commercially for Continental Airlines. He and Kim moved to Evergreen, where they raised their three sons. He was eventually promoted to squadron commander, flying the F-16, and became a captain with Continental.

In 1995 an opportunity to attend the Air War College in Montgomery, Ala., moved the family to the South. Here Mark would reach the rank of colonel, but not before being diagnosed with a heart condition that would drastically change his life. The defibrillator implanted to manage the condition prevented him from running and his medical clearance to fly. His career and passion shaken, the family returned to Evergreen. Mark worked training pilots for Continental, but would begin a journey toward a second career.

He redirected the same passion he had for running toward pursuing a Master of Divinity degree by attending Pacific Lutheran Theological Seminary in Berkeley, Calif. In 2012, he was ordained into the Evangelical Lutheran Church of America, serving in many communities across Colorado's Front Range including as a chaplain in a women's prison.

By 2016, his heart condition had severely degenerated, and Mark received a heart transplant.  After rehabilitation, he completed a triathlon, bicycled across the Rocky Mountains with his wife and eagerly resumed running. He spent his last day doing what he loved, completing a half-marathon he had yearned to do after since his diagnosis. He passed in the early morning of Oct. 22, 2017.

Mark is survived by his wife, Kim; his three sons, Eric (Carolyn), Patrick (Emily) and Christopher (Kelley); three grandchildren, with a fourth on the way; and his siblings Judy, Cheryl, Kathy, Claire, David and Christine.