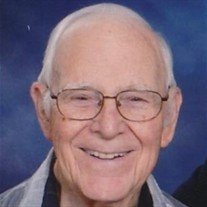 Paul Baughman was born in Columbus, Ohio. He was a man of faith from his earliest days. He received his BA from Carthage College in Carthage, Illinois (the college subsequently moved to Kenosha, Wisconsin). In 1951, he received his Bachelor of Divinity degree from Northwestern Lutheran Seminary in Minneapolis, Minnesota. He married Rachel Johnson and they headed west.

Pastor Paul served the Lutheran congregations of Gloria Dei in Kelso, Washington; Faith in Everett, Washington; Redeemer in Boise, Idaho; Grace in Horseshoe Bend, Idaho; and Nativity in Bend, Oregon. He also served ten years as Assistant to Bishop Gib Fjellman of the Pacific Northwest Synod, traveling throughout Eastern Washington, Idaho and Montana serving as a support/liaison to Lutheran pastors and parishes.

In addition to his ministry, Paul was loving father of four children: Peter, David, Mark and Ann. He was active as a Cub Scout and Boy Scout leader and enjoyed travel, wood carving and woodworking.

Upon retirement, Paul volunteered as a builder with the Mission Builders group of the Evangelical Lutheran Church in America and Habitat for Humanity. Beginning in 2001, Paul dedicated his life to caring for his wife Rachel until her death in 2008. In 2011, he married friend Louise Lindeman from Tacoma, Washington. (Louise happens to be the sister of PLTS alum Gayle Estergreen and aunt to Region 1 Candidacy and Leadership Manager Mark Nelson.)

Paul became a friend of this seminary while he was serving in the Northwest. His uncle Roy, who lived in Seattle, was on the board of the earlier incarnation of PLTS up there which closed because of the Depression. His father helped supported the founding of Maywood Seminary in Illinois. Paul himself offered timely and generous support to PLTS over the course of several years.